Need your puppy delivered right to your door? Please let us know!

Please browse our English Bulldog puppies below and after reading our Policies you may continue in reserving one today!


About the English Bulldog breed. 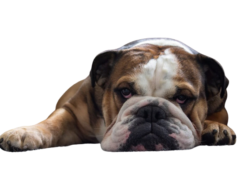 The English Bulldog is a breed of dog that has its origins in England. Today it is one of the most popular breeds because they are affectionate, brilliant, and loyal dogs. This means that English Bulldogs make great family pets for people who have time to give them love and attention because these puppies require daily exercise! If you are thinking about getting an English Bulldog, you can look for English Bulldog puppies for sale.

English Bulldog was created in England in the 19th century. English Bulldog was bred to fight other dogs, so they needed a strong body and short muzzle. They were brought to England by an aristocrat named Lady Lilford, who later started breeding them with other bull breeds that created what is now known as Alaunt. The ancestor of present-day American pit bull terriers and Staffordshire Bull Terriers. The first English Bulldogs came to America in 1817 and were brought by a soldier stationed at West Point Military Academy.

Then these traits were passed on through generations of breeding Bulldogs together that had similar characteristics. This is how the current English Bulldog looks like it came into existence. Aside from being a cute companion, English Bulldog has another vital role of being the mascot of American Marines.

English Bulldog puppies are full of life and energy. They have an influential personality and will need early socialization with people, animals, and places. Hence, they grow into well-rounded adults who can handle different situations without becoming fearful or aggressive. English Bulldogs love everyone – they don't discriminate between kids, adults, or other animals.

They're playful and energetic throughout their lives, so they need to be taken on daily walks or jogs to maintain a healthy weight. You can never go wrong in choosing an English Bulldog. They're very loving and loyal to their families, eager to please, and like to be the center of attention. You can rely on an English Bulldog to stick by your side through thick and thin.

Caring and Living with an English Bulldog

They should always be outside to go potty and never unsupervised. In regards to their grooming, we have decided that we will do the brushing and bathing. We also need to talk about when they can go outside in our backyard, if at all. Also, what foods are good for them to feast upon are expensive, so we want to make sure they are eating well.

Knowing these things ahead of time is going to be so helpful because puppies grow up fast! It's best if they know not to jump on the couch already from the get-go and not from when they are puppies. It is also best to teach them to listen to us quickly because it can take a while to learn what's OK or not in our house. There should be some schedule already set up with the grooming before we get the dogs to know how often we will be brushing them. If the dogs are getting brushed too often without bathing, they will probably get lots of knots in their fur, which is not fun for them or us! With the backyard, we should decide if there's a particular area that is OK for them to go potty when it may rain outside and then another part for sunny out.

When they can go outside, we should also decide where the best place to play with them will be because our backyard may or may not have lots of grass for them to run around in! You can get so many different foods from a pet store and even at your local grocery store. You can choose a variety of toys for them to keep them busy all day.

On a side note, if there are any children in your house, make sure they know how to handle them. They can be very rowdy at times, and little kids might not know what's good or bad for their bodies, so it would be best that only older people play with them until they are older.

Also, it is essential to note that these are not toys. They can be harmful if mishandled or in the wrong way, so make sure you know their purpose before using them because you don't want anyone getting hurt! You must be a responsible owner and know your limits.

They are brilliant and know if you are mad at them, so never get angry when training is essential. They also learn very quickly when training because they want their food! Aside from this, they are a great companion, and they make for some great cuddle buddies. They are reliable, and you can always trust that they will be there for you. If you are looking for a great pet, this is the one you want to go with!