Please browse our French Bulldog puppies below and after reading our Policies you may continue in reserving one today!

We do not currently have any French Bulldog puppies at the moment.

Please get on our newsletter list to be notified once we have more french bulldogs!

About the French Bulldog breed. 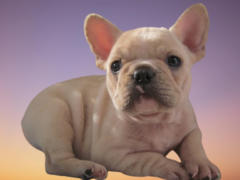 The French Bulldog has its origins in 19th-century England, where it was bred as a miniature version of the English Bulldog. They were popular pets among lace workers in Nottingham and were brought over to France by these workers when they moved there for work. They quickly became popular in France as well, especially among the wealthy who could afford to own these small, expensive dogs.

The American Kennel Club first recognized the French Bulldog in 1898 and it has been a popular breed ever since. They are now one of the most popular breeds in the United States. You should conduct a thorough search for a reputable breeder that provides health clearances for their puppies’ parents. It would help if you also visited the puppy in person to make sure they are well-socialized and comfortable around people. A good breeder will be happy to answer any questions you have about the breed.

This can be a great way to find an already trained and socialized dog, and you may even be able to adopt an older French Bulldog for a lower price than a puppy from a breeder. Just make sure to visit the dog in person to ensure they are a good fit for your home and lifestyle before you commit to adopting them.

French Bulldogs are smart, playful, and affectionate dogs that make great companions. French Bulldogs are simply adorable. They have an irresistible face with big, round eyes and cute “bat” ears. But don’t let their cute looks fool you – Frenchies can also be stubborn and headstrong. They are intelligent dogs that require firm but loving leadership.

They are typically good with children and other pets and do not require a lot of exercises. However, they can be stubborn and may require patience when training. French Bulldogs typically weigh between 20 and 28 pounds and stand 12 to 16 inches tall at the shoulder. They have a short, fine coat that comes in a variety of colors, including brindle, fawn, white, black, and tan.

They shed minimally. French Bulldogs are devoted companions and will form strong bonds with their owners. They do not like to be left alone and may become anxious or depressed if ignored. They are relatively quiet dogs, but they can snore and snort quite loudly.

French Bulldogs should be socialized early and frequently introduced to different people, places, and situations. This will help prevent them from becoming too protective of their family and home.

They can be stubborn and headstrong, so patience and consistency are key when training them. They respond best to positive reinforcement methods, such as treats or praise. You can easily find French Bulldog puppies for sale from a reputable breeder, or you may even be able to adopt an adult French Bulldog from a rescue organization. Just make sure to do your research before bringing one home.

Caring and Living with French Bulldog

They also need regular exercise, although a short walk or play session will suffice. Frenchies typically live 10-12 years. French Bulldogs are generally healthy dogs but can be susceptible to some health problems, such as respiratory issues, allergies, eye problems, and hip dysplasia. They also tend to snore and snort and may be prone to heatstroke.

French Bulldogs are typically good with children and other pets, but they can be possessive of their food and toys. They need plenty of socialization to prevent them from becoming too protective. They are relatively inactive indoors and do not require a lot of exercise. A short walk or play session will suffice. However, they enjoy a good romp in the yard and love to play fetch. Having this breed at home means having a lazy best friend to cuddle with on the couch.

Aside from being companion dogs, French Bulldogs also excel in various dog sports such as agility, obedience, and rally. They are also popular therapy dogs. A lot of people are drawn to their cute looks, but they are also attracted to their friendly and loving personalities.